After Oudtshoorn I took a detour via De Rust and Prince Albert to Calitzdorp before getting back on the R62. That took me over the Meiringspoort- and Swartberg-Passes and through some spectacular landscape. Thank you Jake for suggesting that route, it was amazing. 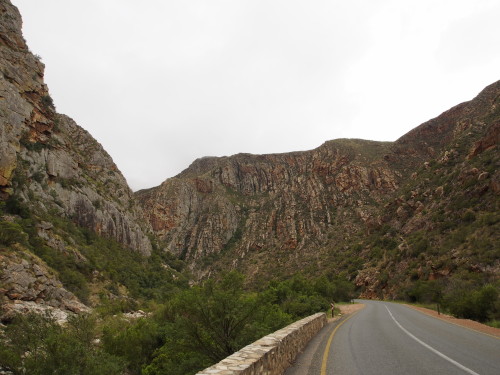 On the first day there’s quite a bit of ascent but it’s not very steep and on a good, wide tarmac road so it’s quite easy cycling. 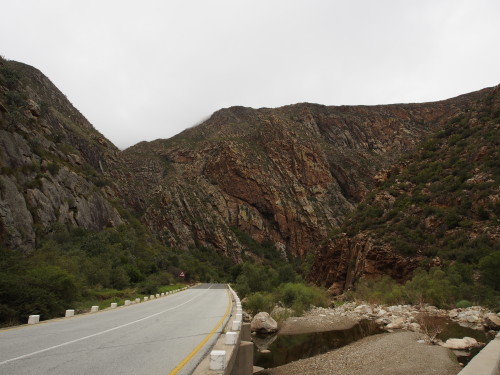 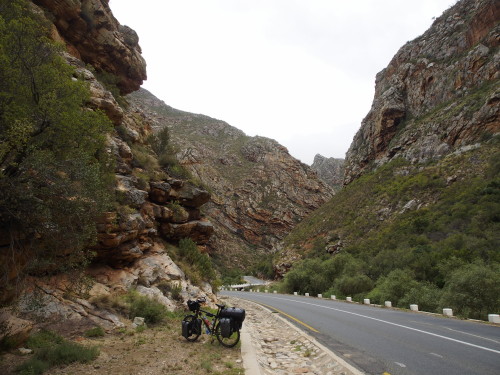 You go through narrow gorges and bizarre rock formations. Often it looks like you are riding onto a rock wall and can hardly see where the road will continue until you get there. 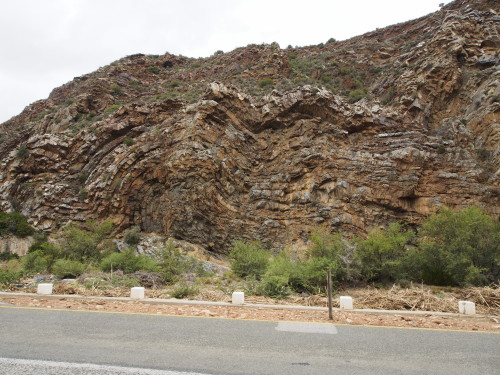 The rock consists of many warped layers. 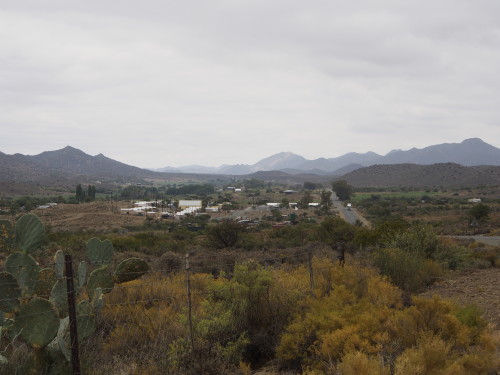 The gorge ends at the village of Klaarstroom. 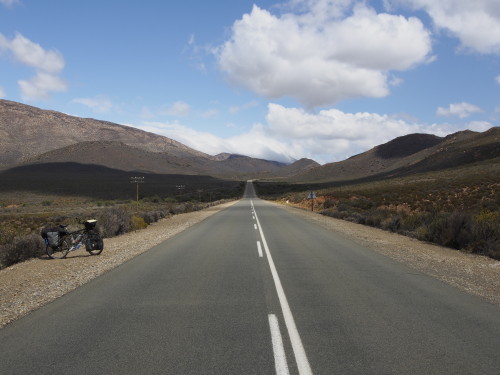 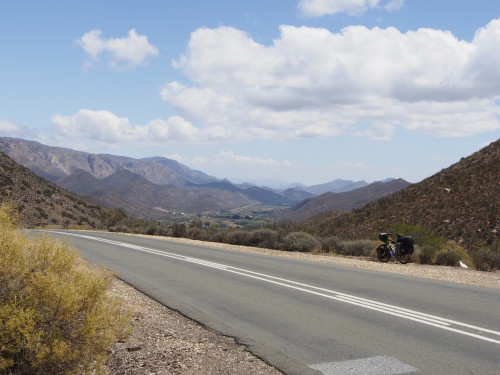 Before you ride down again into the valley that eventually leads to Prince Albert. There’s mostly olive farms and quite a few wineries down there. 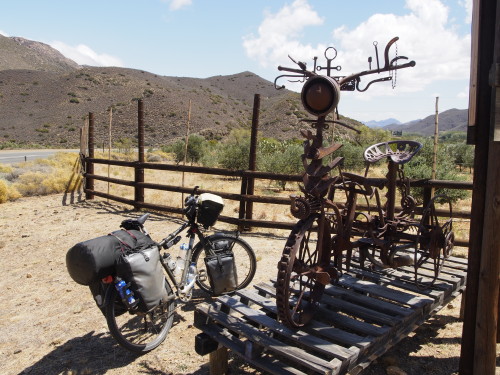 I think I’ll keep my own bike, thank you… 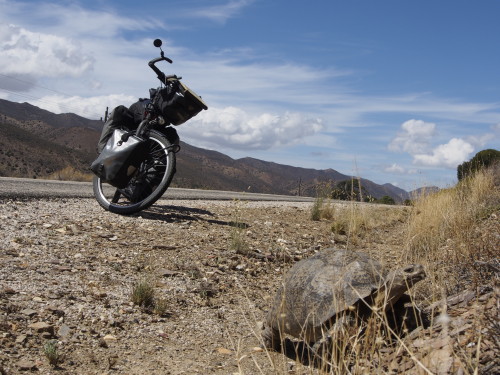 Met that guy walking along the road. 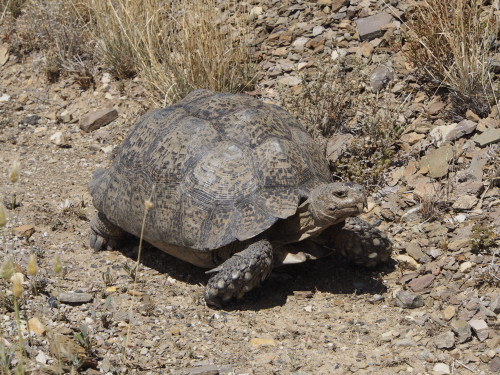 It was huge, way bigger than the turtles I saw before on this trip. I’d estimate 60 cm from nose to tail. 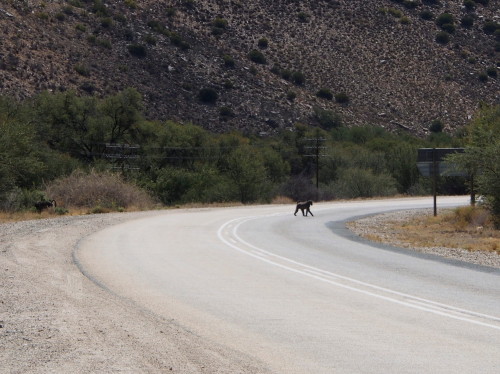 Apart from turtles there’s the occasional group of Baboons. But they are quite small and shy here. 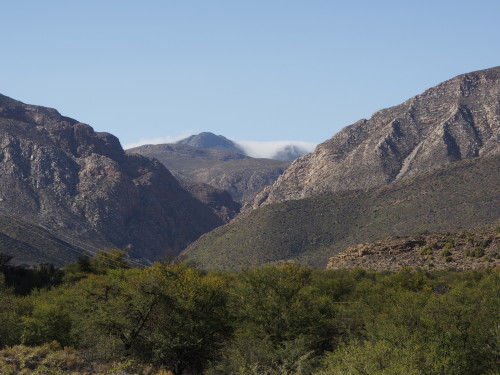 The next morning on the beginning on the road towards the Swartberg Pass. I have to get all the way up there… 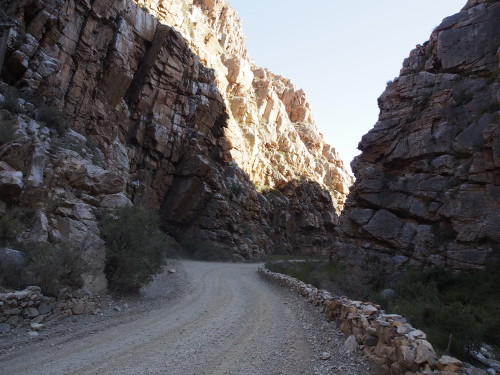 No more tarmac road but it’s still fine to cycle with a touring bike. Just a little dusty when cars pass. 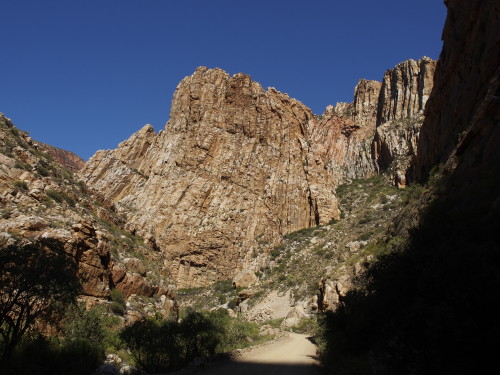 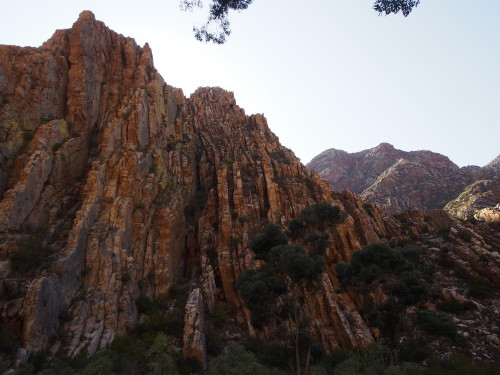 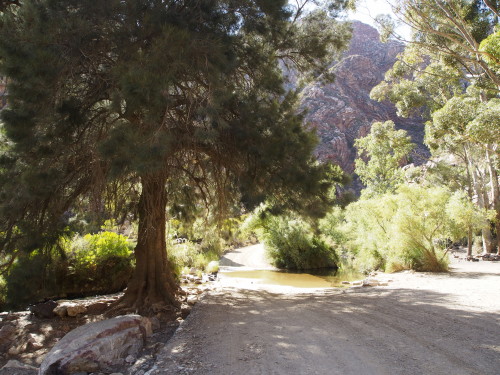 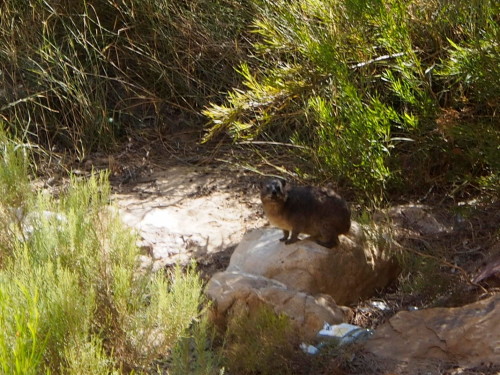 There’s quite a few Klippschliefers here. 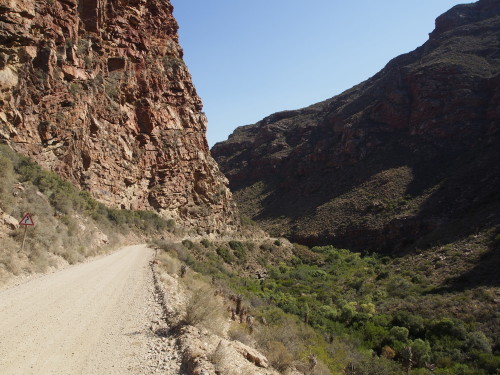 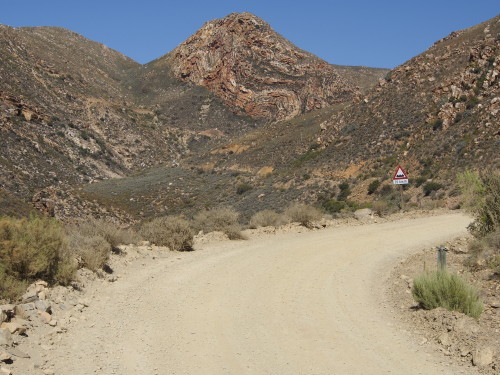 It might be hard to see on the small picture but the road is winding up all the way that left mountain in numerous hairpin turns. 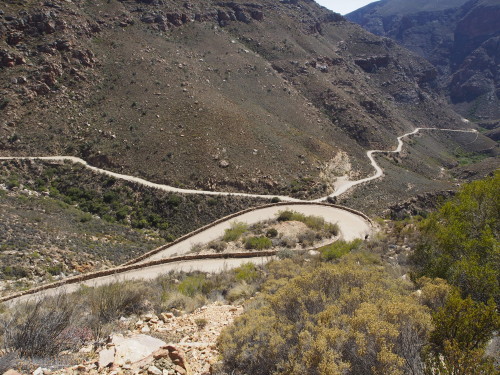 Looking down after riding up the first few turns. During the first 2 or 3 I was wondering whether this was a good Idea going that route with a heavily loaded touring bike, it feels like something you would rather do with a mountain bike. But going slow and resisting the urge to get off the bike and push did the trick. 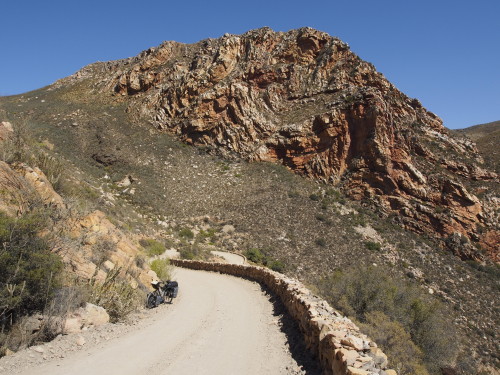 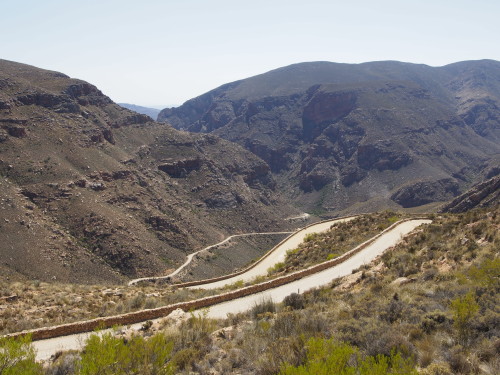 A few turns further up. 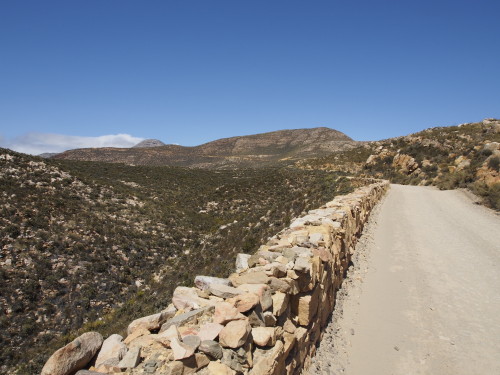 After about 2/3 of the ascent the hairpin turns get less and the road is not as steep any more. Still, quite a bit of climbing remaining here. 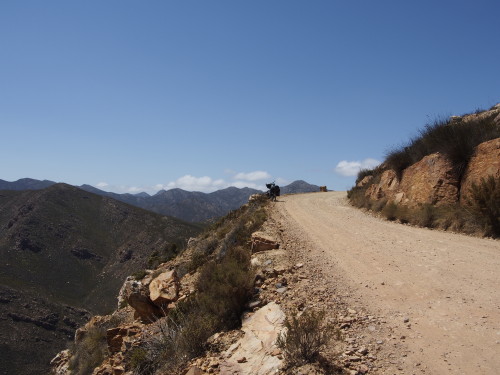 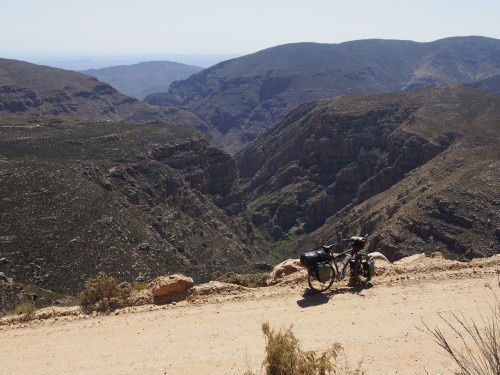 You better not go to far on the left, even with oncoming traffic. But I have to say all drivers I met on this narrow road were quite considerate, some even cheering to encourage me when they saw me fighting my way up. 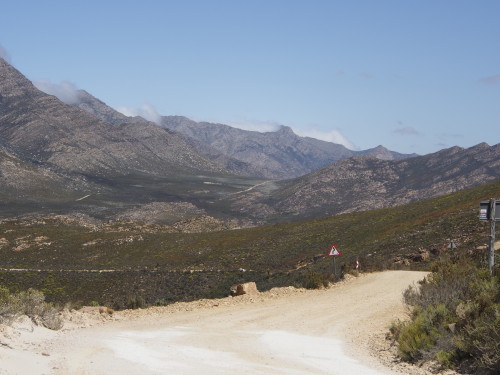 And finally the last part after reaching the first, lower summit. The road is that narrow bright line in the middle of the picture from left to right. 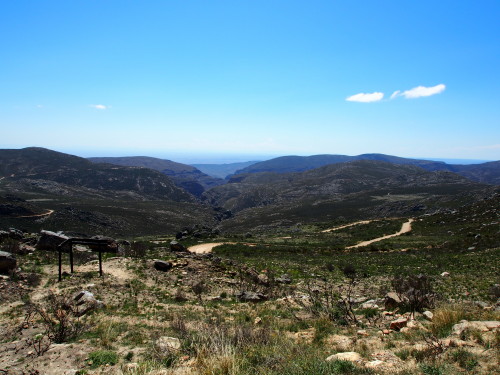 Made it to the top! 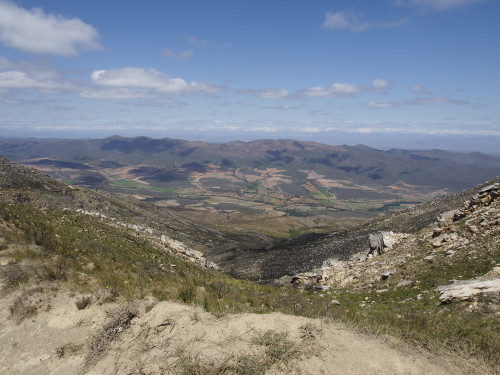 Looking down the other side of the mountain. The landscape looks quite different there. 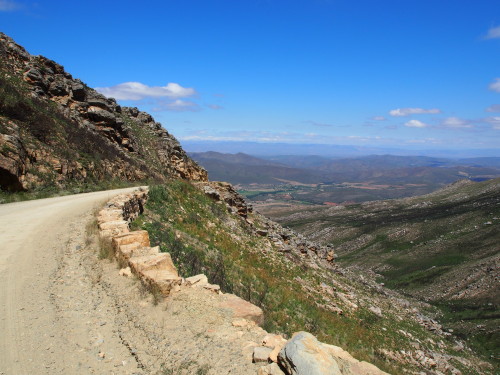 Of course riding down from 1500 to 600 meters of altitude in one go is big fun and a great reward for riding up there. You better have good breaks though, you don’t want to get too fast and off those roads.

The next day back on the Route 62. Looking back to the mountains I crossed the day before. 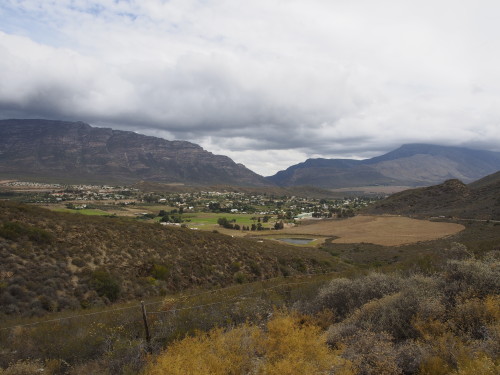 Arriving in Barrydale this afternoon.