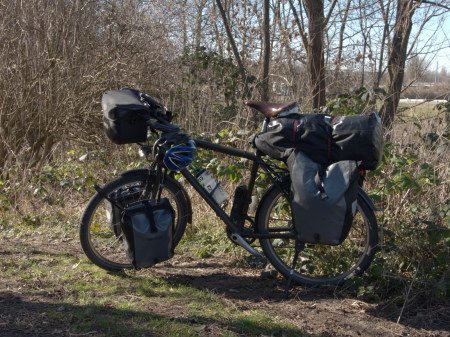 I bought this Velotraum bike 4 years prior to this trip and have been using it almost every day since then – mostly for my daily commute to the office but also on a one month trip in India in 2010.

The bike was originally equipped with Shimano derailleur gears but after that first set was worn down I had it replaced with a Rohloff gear hub.

While I only used the panniers (all bags made by Ortlieb) on the back of the bike during my trip in India I’ve since added the small bags on the lowrider around the front wheel which feels a lot better balanced. The additional black bag on the back carrier is a dry bag used to store light but bulky items like tent, camping mat and sleeping bag.

For navigation i carry a Garmin GPSMAP 62s and paper maps for overview an backup.