I’m back on the road again. I returned from Hoima to Kampala with the bus (the bike stowed away in the back) because I was in a hurry to meet a friend who was about to fly to India. 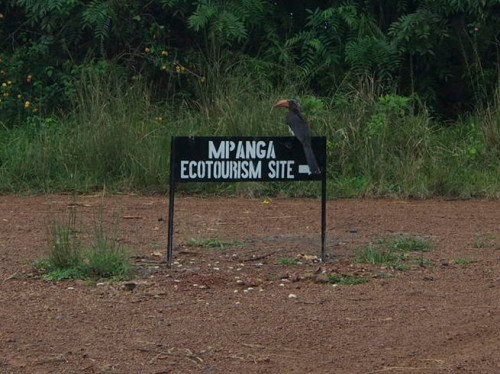 On the first day after Kampala I went to Mpanga Forrest Reserve. It’s only 30 kms from Kampala (but 45 from the other side of Town where I was staying) so I only had a short distance to go which gave me time in the afternoon to explore the Forrest again (I’ve been here before on a day trip in 2004). This time I stayed for the night which was quite pleasant. They have a campsite, quite decent rooms and I could pre-order food for dinner. 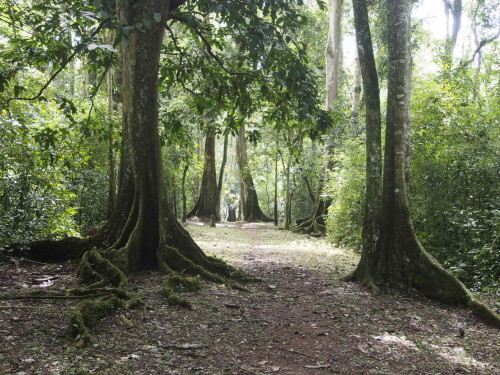 At first it’s an easy walk on well prepared paths in the Forrest. 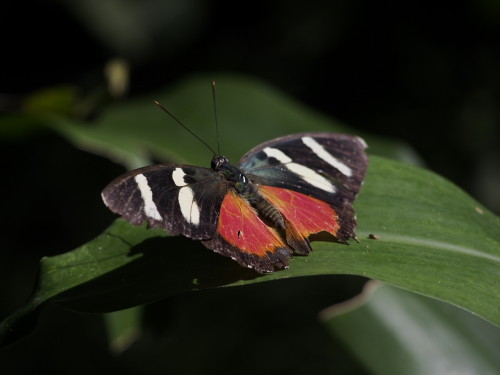 There’s monkeys, lots of birds and tons of butterfly 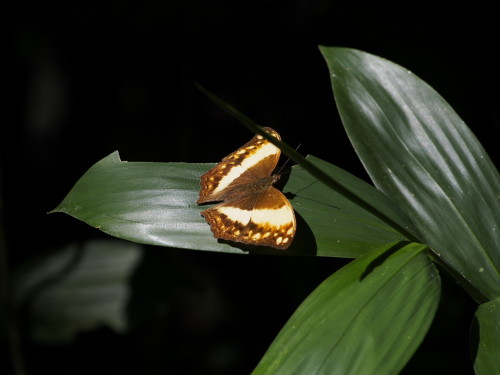 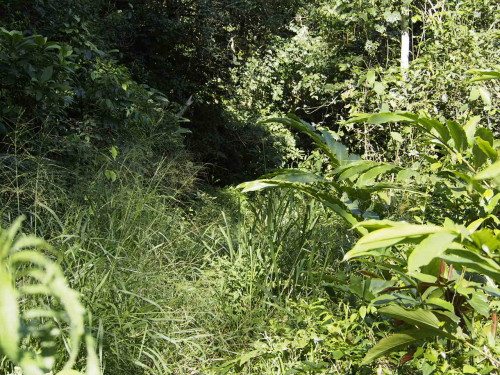 After some time the path gets narrow and overgrown. But you can still see it underneath so there’s no problem with getting lost (no guide was available so I went alone). 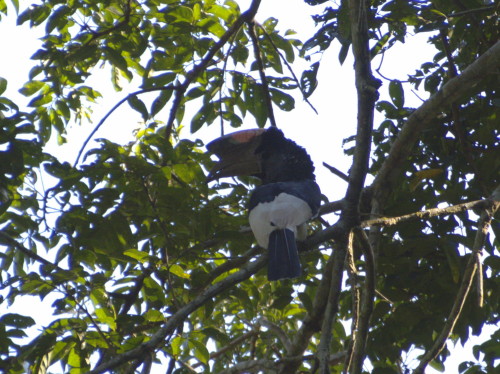 This is what I – the absolute non-bird-expert – believe to be a Hornbill. Those are quite impressive, despite the duck-like noises they make all the time. They seem quite big and heavy and you’ll hear a loud “swoosh”-sound when they fly. That big thing that looks like another bird behind this one is actually part of its massive beak. 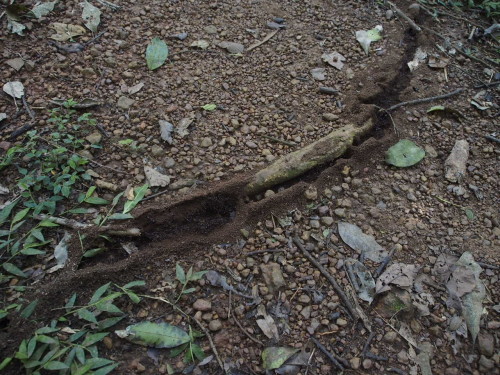 My first encounter with these ants was accidental and painful. I had stepped into their way while taking pictures of butterfly. Luckily most of them where busy attacking my shoelaces so only three actually bit me. This path shown here was more obvious to I could watch them without further confrontation. 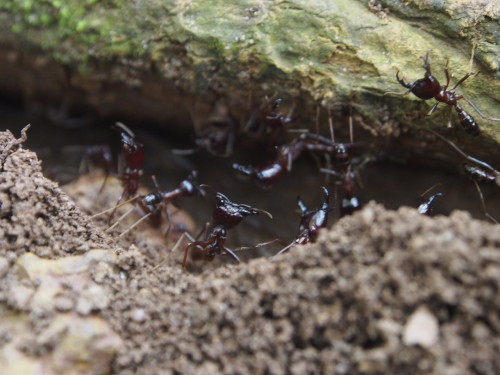 Below the smaller ants rush along at an amazing speed carrying insects and other stuff. The bigger ones (about 10mm) guard them and attack any intruders. At some point they almost build a roof over the whole thing with their bodies.

Luckily the weather has changed a bit. There way only little rain in the early afternoon, short enough to pop into a nearby shop, get a soda and wait under their roof for the rain to stop.

Today I continued to Masaka – or almost did… I had to stop at a guesthouse less then 10km from Masaka when I felt a blister developing on my left foot. There was quite a bit of pushing the bike up steep hills and the last few kms to Masaka would have been more of that and I did not want to risk it getting worse. 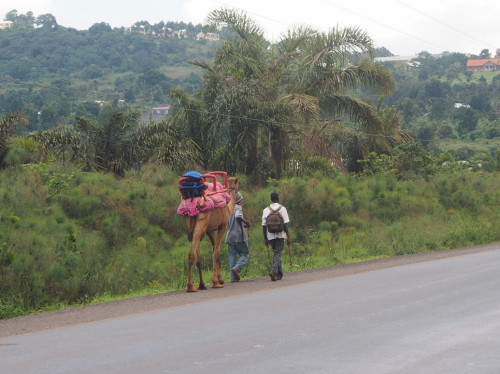 For once I wasn’t the only one traveling in a weired way. I’ve never seen a camel in Uganda before. 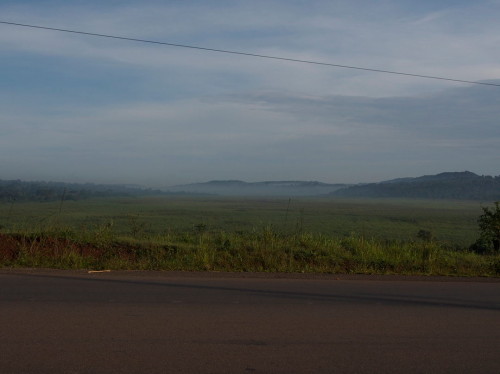 This is what most rivers around here look like. That’s right, you can hardly see the water. The surrounding flat area is swamp and the plants are papyrus. 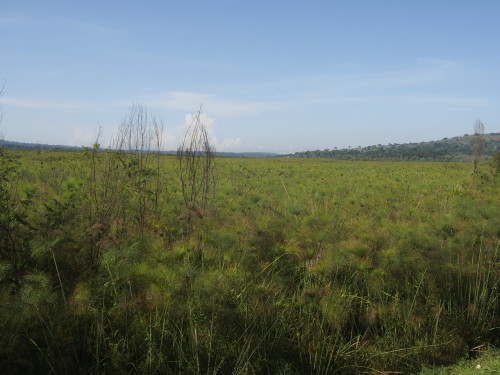 The papyrus up close. The plants are easily 3 meters high. Sometimes people cut them, dry them and use the dry stems to build sheds and fences. 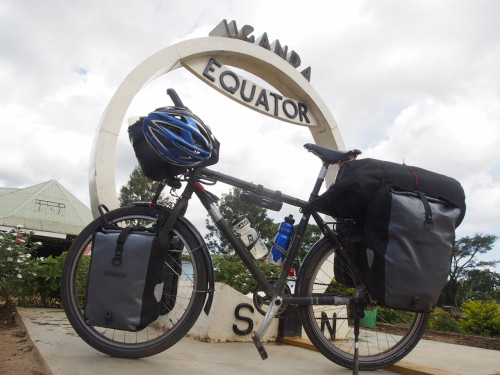 I also crossed the Equator today. Here’s my bike on the Equator line drawn on the street – which is quite a few meters off the actual location. 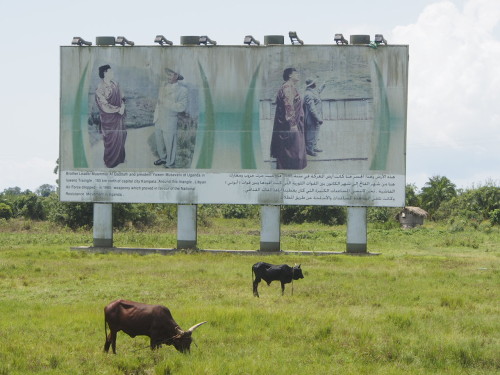 A little history lesson along the road. The text on the sign reads: “Brother Leader Muammar Al Qaddaffi and president Yoweri Museveni of Uganda in luwero triangle, 150km north of capital city Kampala. Around this triangle, Lybian Air Force dropped – in 1985 – weaponry which proved in favour of the National Resistance Movement in Uganda.”

There was tarmac road all the way so far and it is mostly in good condition. What makes cycling here a little less pleasant (compared to the Kampala – Hoima road) is the number of trucks heading for the border and the broken glass everywhere on the side of the road. I was surprised it took until this afternoon when I finally had to fix another tire. Luckily a friendly mechanic from a nearby welding shop wanted to try out my tools and that meant less work for me. After just over 15 minutes I was up and running again. 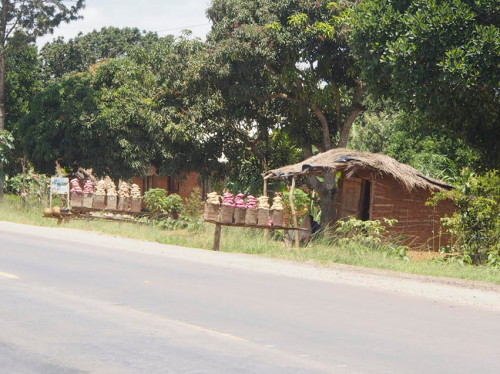 Many local farmers sell their produce along the road. Those are sweet potatoes, other commonly available fruit and vegetable are watermelon, jackfruit (I love that stuff!), pineapple, papaya, sweet bananas, avocado, matoke, beans, potatoes (called “irish” as in “irish potatoes” here to distinguish them from sweet potatoes), tomatoes, onions… Unfortunately it’s not mango season yet. 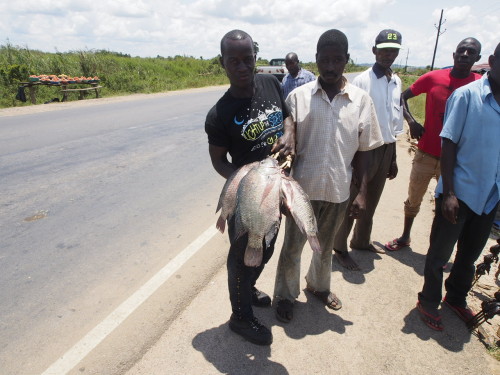 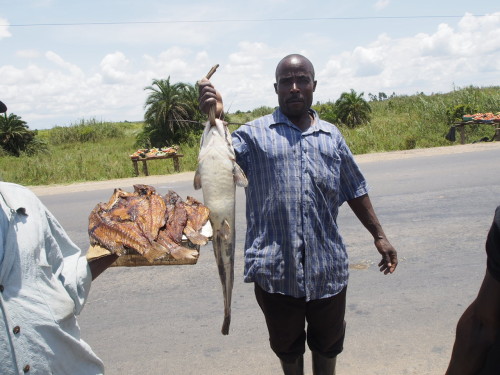 Available both smoked and fresh (don’t expect any ice or something like that, the fish is tied to the front of the car so it stays cool from the wind and does not stink up the vehicle). 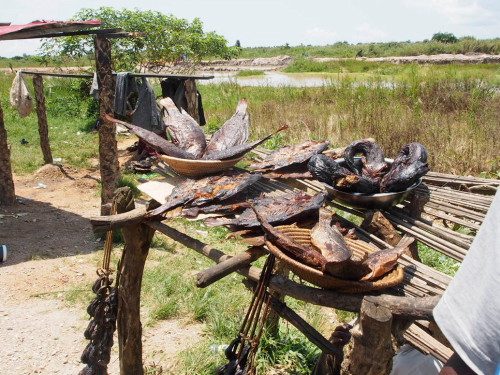 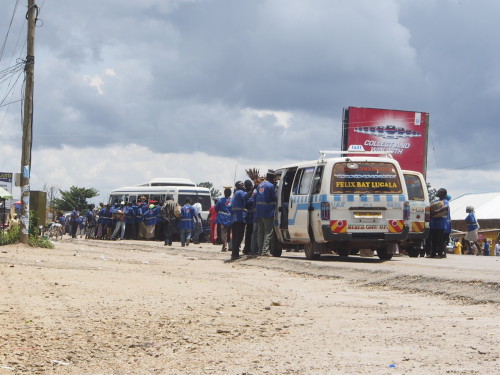 One of the many places (Lukaya in this case) where buses and taxis stop and food is sold to the passengers (by those guys in the blue shirts). It’s actually quite convenient, you don’t even have to get out of the bus, they will sell through the window. The sticks some of the vendors hold up are wooden skewers with grilled meat. At a big place like this there’s goat, chicken and liver (beef I guess) available, smaller places have only goat most of the time. There’s also chapatis, fried cassava and grilled bananas to go with the meat.

Those grilled bananas are really tasty (just a little sweet, mostly sour) and they go very well with the liver – my favorite combination that I always have at places like this.

The Mini-Bus in the back is a Matatu, the most common form of transport for both short (within a city) and medium distances (up to a few hundred kilometers). Officially they are built to carry 14 passengers plus the driver but that is only theory of course. I once traveled in one with 21 other people and heard stories of even bigger numbers. I like cycling :)