After leaving Bulawayo I went to visit the Matopos National Park. While there is quite a bit of wildlife the main attraction here is landscape and its bizarre granite formations. And the best thing: the park is very well accessible by bicycle. I did not meet any of the rhinos while cycling (and I’m not too unhappy about that) but cycling among Wildebeest, Zebras, various Antelopes, Warthogs, Baboons was quite fun. 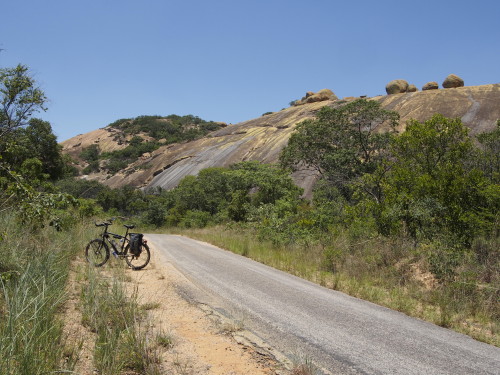 The landscape consists of many mountains that are basically one enormous piece of granite. 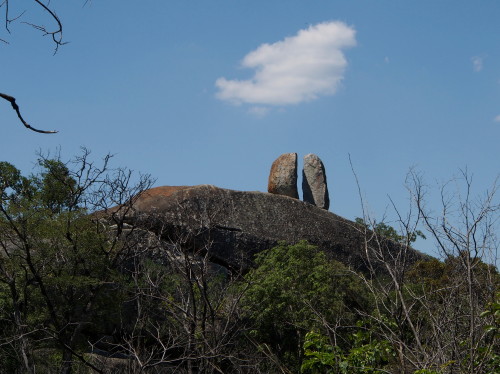 They usually have all sorts of cracks… 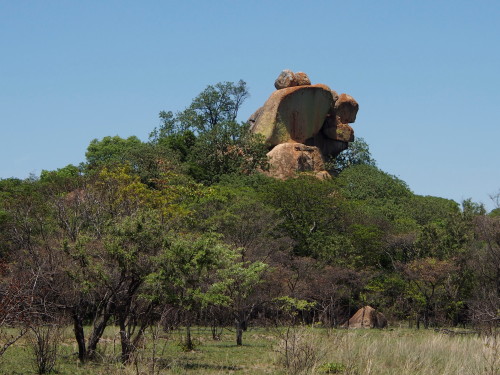 … and after a long process of erosion has removed the weaker materials stacks of huge granite boulders remain. 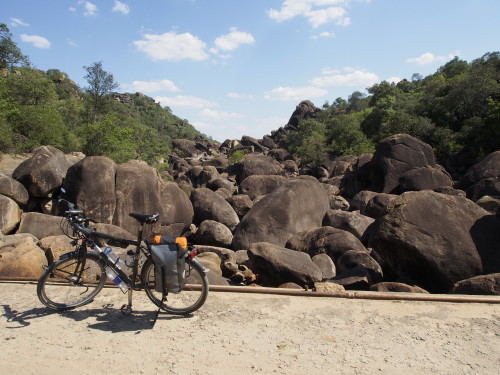 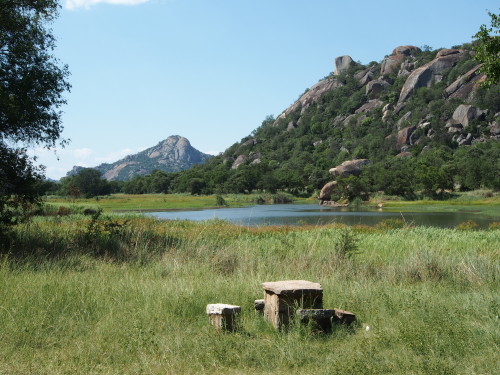 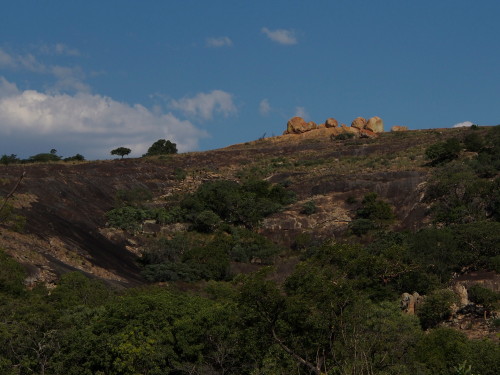 The most famous point in the park is called the “View of the world”. Here you can see the circle of rocks up on the hill. 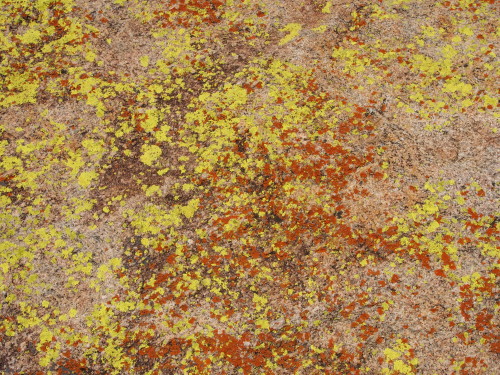 Around it the rock is covered with a quite colorful combination of yellow/green, red/orange and blue/gray lichens. I’ve seen that before near Nalatale. 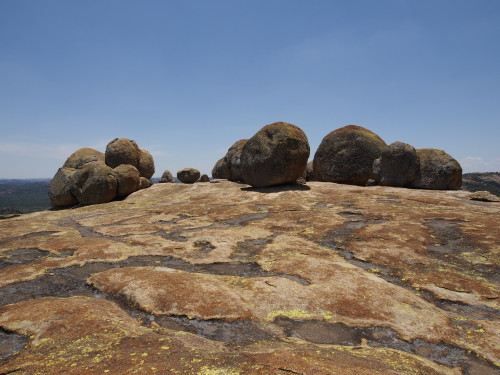 Getting closer to the circle of rocks, a formation that almost looks unnatural. 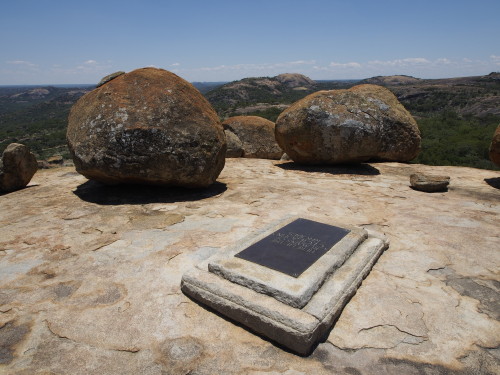 In the middle you’ll find the grave of Cecil Rhodes. This place feels quite magical with a great view all around. It was considered a holy place of spirits by the local population long before Rhodes chose it as his burial site. 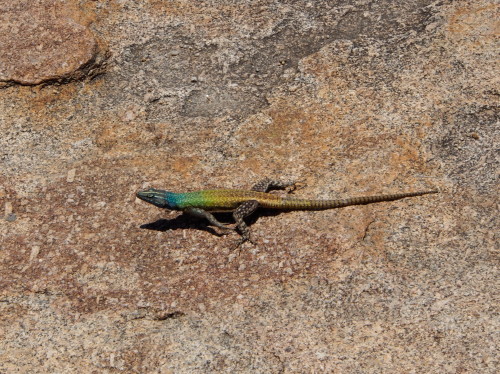 As it is the low season and I was visiting on a weekday I even had this popular spot all to myself when I was there. As soon as I sat quiet in the shadow for a short while these colorful lizards started so appear from under the rocks.

Dozens of them actually. 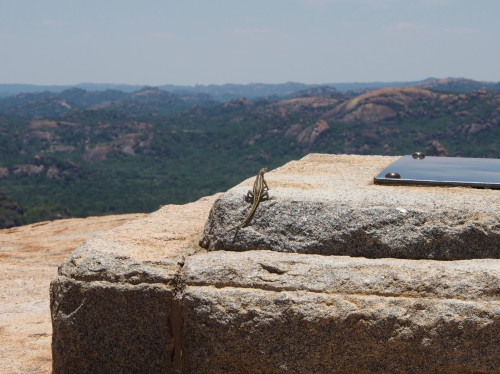 Some seem to enjoy the view as well. 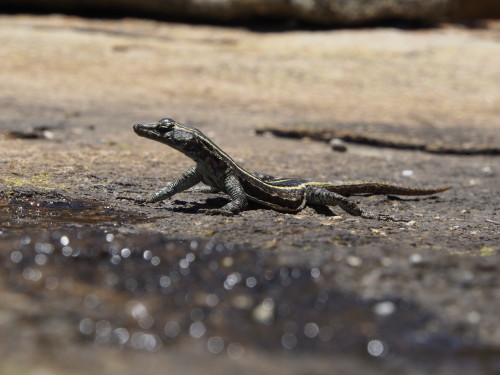 It was quite easy to get them to come quite close. Just avoid sudden movements and pour a little water on the ground and they will come to drink. 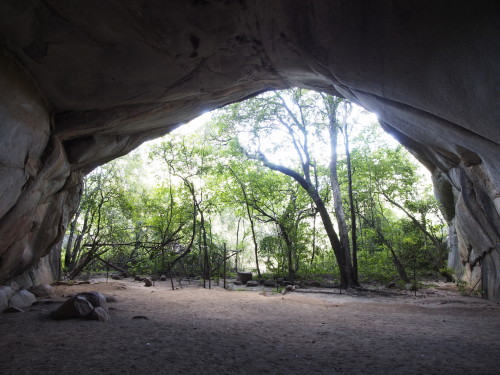 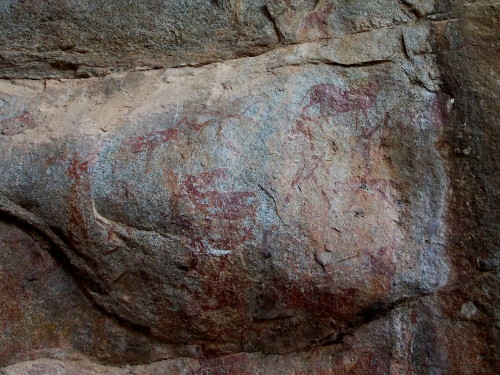 I left Zimbabwe after that this morning. I’m really glad I came this way even though I did not have it on my original route, Zimbabwe was one of the most interesting and enjoyable countries I visited on this trip.

Now I’m in Francistown, my first stop in Botswana. It’s weired, I’ve never been here before but when I look at the map so many of the places around here sound familiar because they appear in the Mma Ramotswe detective stories.