I went from Kigoma to Kasanga by boat. That ship, the MV Liemba is quite remarkable. Not only is it the world’s oldest passenger ship in regular operation, it was sunk and stayed submerged in the lake for 8 years before being recovered and restored. 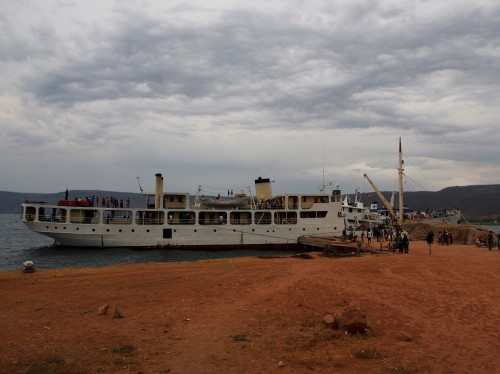 It was originally built in Germany in 1913 and then transported in parts by boat and railway to Kigoma. The Germans used it as a war ship but when they lost the area to British and Belgian troops they sunk the ship to prevent it from falling into their enemy’s hands. The British recovered it in 1926 and the ship was then restored and put into service as a passenger ferry. It ran on the original steam engines until they were replaced by diesel engines in 1970.

A more detailed history of the ship can be found here. 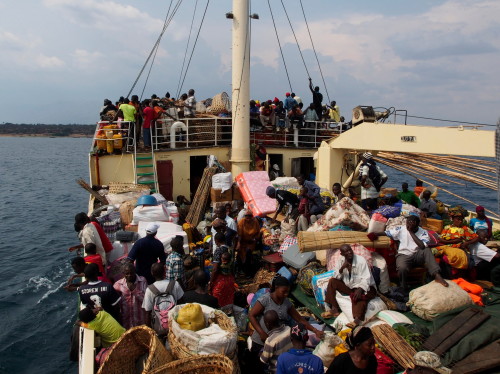 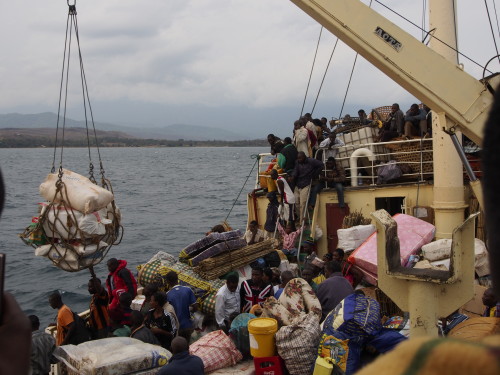 The boat does not look that big, I find it surprising that it can hold 600 passengers plus 200 tons of cargo. And by the way the deck looked when we left Kigoma I bet there were more that 600 people on board. Every centimeter of space was used. There was far to little space for everybody to lay down so many passengers spent the first night sitting on pieces of cargo or leaning against something. Unsurprisingly the atmosphere was tense and sometimes even felt aggressive, there was shouting all night. 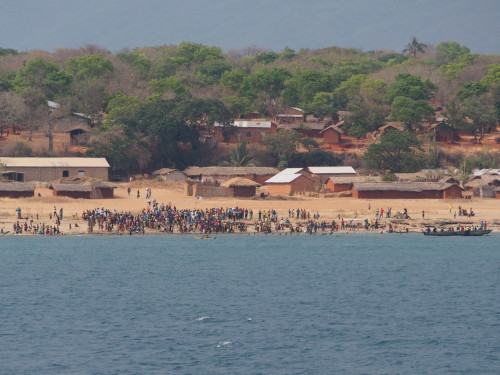 The ship stops at several places before Kasanga and then finally in Zambia (the only places on the route that have a proper port). Those villages have poor if any road connections so the arrival of the Liemba every second week is a big event. Here you can see what must be the better part of the population of the village assembled at the beach. 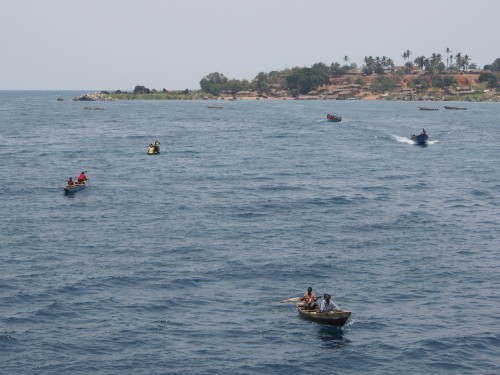 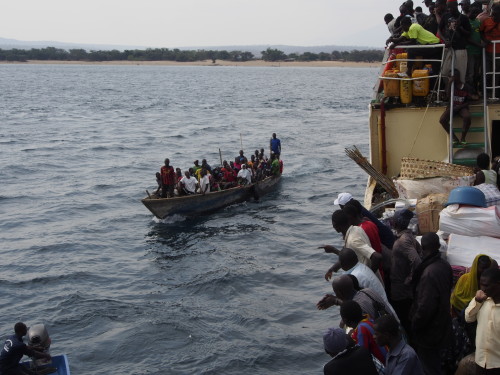 As soon as the Liemba gets close enough it will sound its horn and that’s the starting signal for a number of small boats to rush there to pick up passengers and cargo. 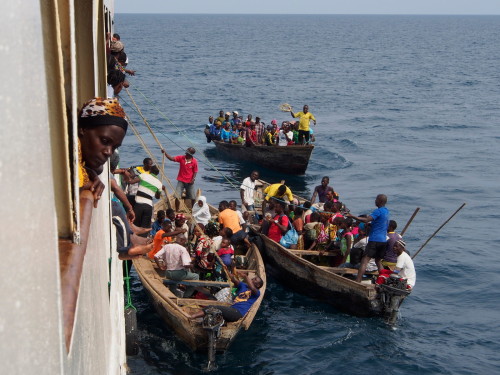 They would then throw ropes up to tie their boat to the Liemba while loading stuff. Those people steering the small boats where sometimes quite competitive, I saw them push each other away from the best spots a few times. And while all that is crazy enough during daytime, they also do that at night, the whole thing illuminated by a few flashlights. Add a few bigger waves into the mix and it looks really scary. 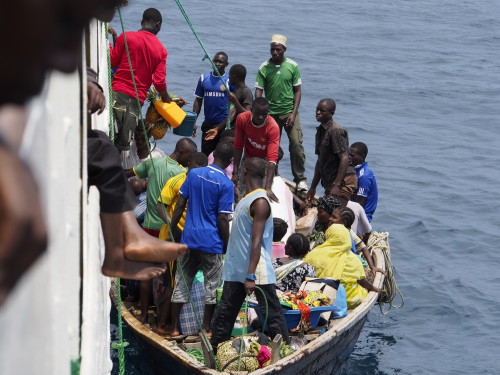 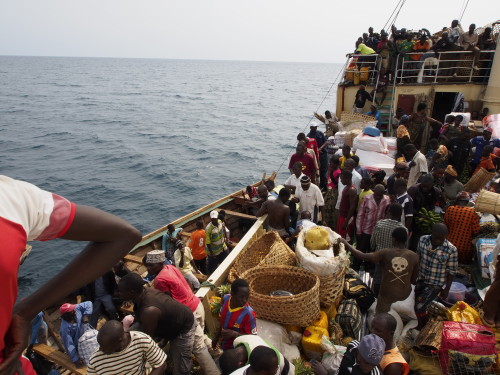 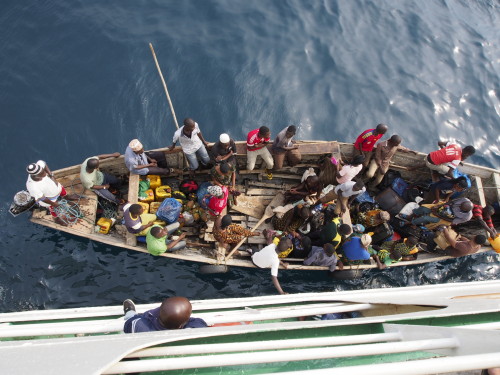 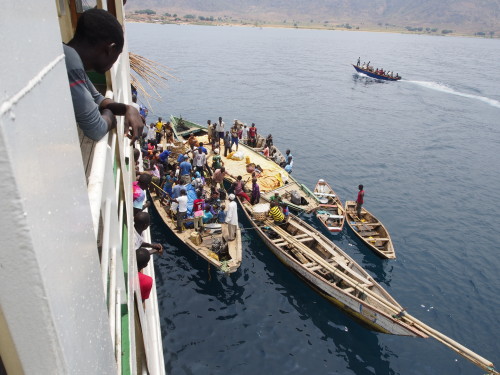 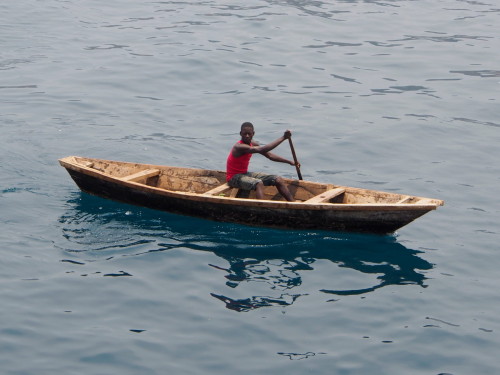 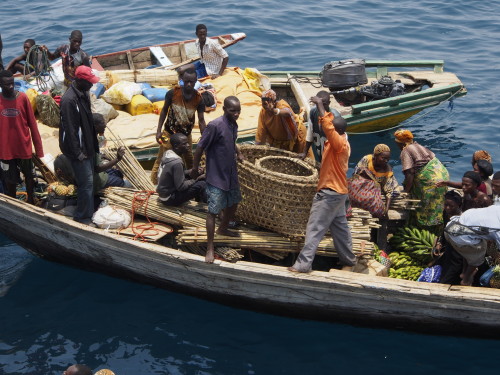 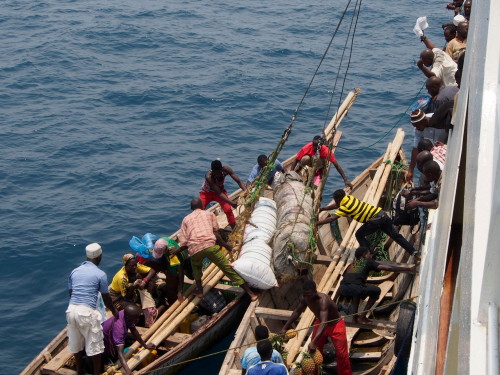 Bigger pieces of cargo are unloaded with the crane mounted on the deck of the Liemba. Those stops sometimes would take several hours until everything was unloaded and the journey continues. 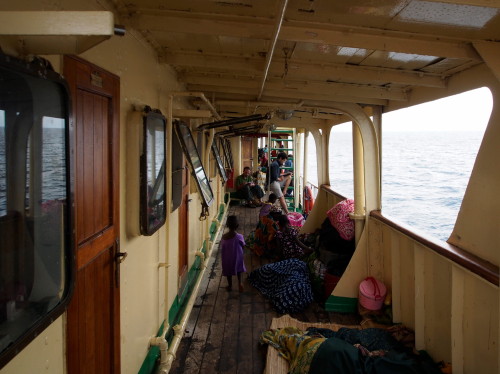 Quite a number of people disembark on every stop but only few then enter the boat. So after the first day the whole situation became much more relaxed as most passengers now at least had enough space to lay down. On the left of the picture is the door to my cabin (which I shared with another person). Under the colored blankets are people getting some sleep which they likely did not get the night before. 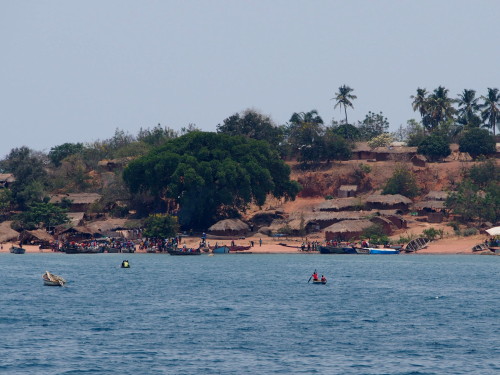 Another village with people gathering on the beach. 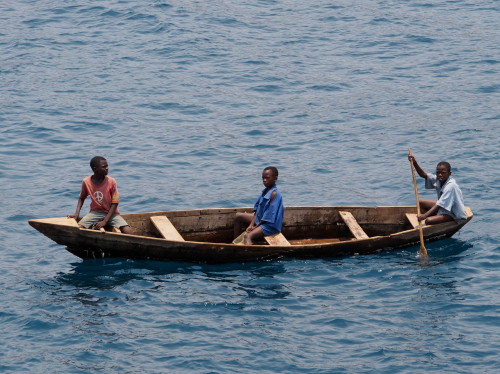 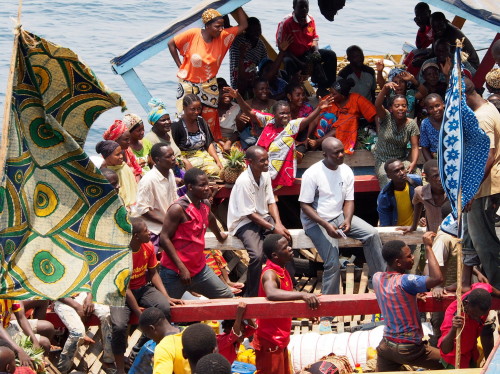 On two occasions boats came with people singing and and celebrating. Those apparently were wedding preparations and they picked up the bride that came to the husband’s village with the Liemba. 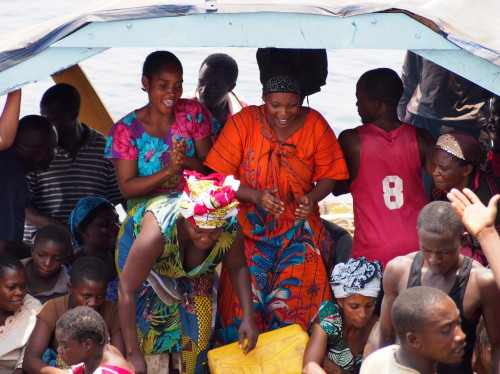 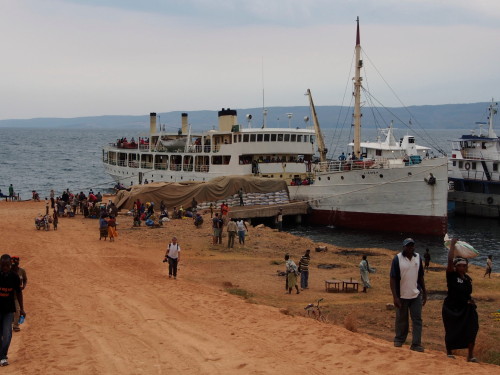 On the evening of the third day we arrived in Kasanga, the last stop before Zambia. To avoid port taxes in Zambia the ship would remain in Kasanga for the night. Me and some other travelers decided to take advantage of that and sleep on the boat for another night (there’s a nice campsite with a beautiful beach but the owner seemed quite dishonest when negotiating prices). That of course meant we had to be off the boat by 5 in the morning and wait for another hour until there was enough light to move on. But that turned out to be a good chance to discuss our route with the security guards at the port and get some valuable advice which way to go. 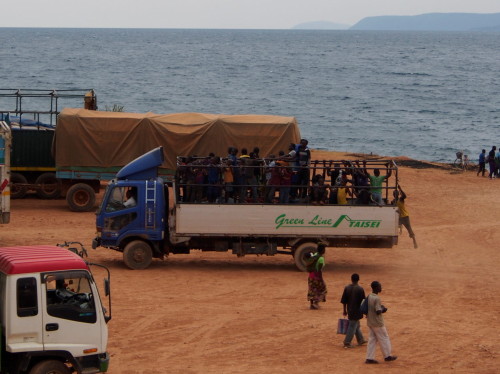 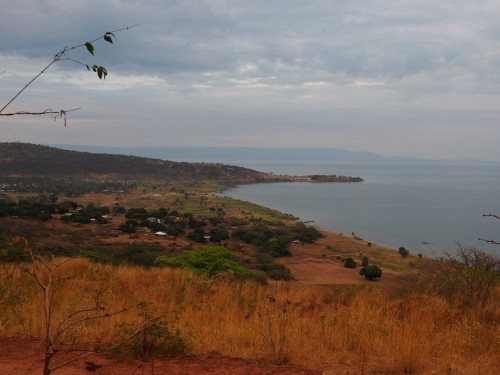 One last view of Kasanga, Lake Tanganyika and the Port on the headland in the background.

I’m now on the way to Sumbawanga (and from there to Mbeya next). The area feels quite remote, the village where I spent the first night did not have any shop (let alone restaurant) so I had to get a charcoal stove and some foodstuffs from the owner of the guesthouse.

The roads have been terrible so far, apart from the usual potholes there’s sometimes a layer of very fine sand, 20-30cm deep on the steepest slopes. It feels like pushing the bike through thick snow and the first 40 kilometers took me 8 hours. And the weather is about as great as the roads ;) It’s a good thing I’m highly motivated to be cycling again after the long break in Kigoma. And the worst part should be behind me now, there’s a new tarmac road on my route tomorrow.